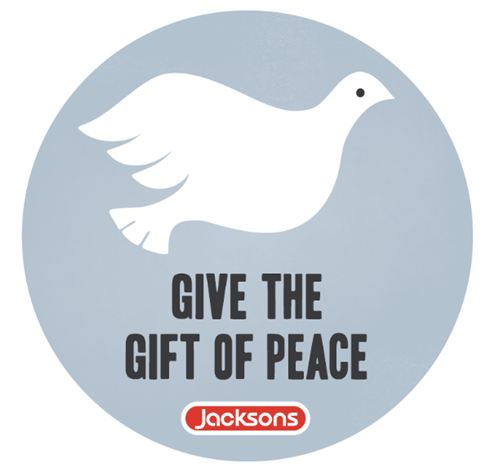 During this season of giving, now through Dec. 25, Jacksons Food Stores will match tax-deductible donations dollar-for-dollar in support of the fifteenth annual Gift of Peace campaign to help end sexual and domestic violence. Customers who donate $1, $5, or $10 will receive a paper peace dove to hang in support of survivors and help bring visibility to the campaign in Jacksons Food Stores and Jacksons-owned ExtraMile stores across six western states, including Arizona.

The annual Gift of Peace campaign has raised over $1.35 million in donations since it began in 2004. Last year, between Thanksgiving and Christmas, Jacksons Food Stores and its customers raised a total of $187,314 ($93,657 matched dollar-for-dollar by Jacksons) for state domestic violence coalitions in Arizona, Idaho, Oregon, Washington, Nevada, and Utah.

Customers in Arizona showed solidarity and generosity towards domestic violence survivors by contributing $8,701 to the cause in 2018. Jacksons matched that amount to further amplify the community’s impact and support the Arizona Coalition to End Sexual & Domestic Violence (ACESDV) with a total contribution of $17,402.

“Our aim in 2019 is to encourage more donations than ever before,” said Cory Jackson, president of Jacksons Food Stores. “These funds help raise community awareness about the problem of domestic violence and provide essential resources for survivors and their children. We want to make this the most impactful year of our Peace Doves campaign yet.”

All Arizona customer contributions directly support the Arizona Coalition to End Sexual & Domestic Violence, a statewide non-profit member organization focused on education, advocacy, awareness, and increasing services along with a Helpline for sexual and domestic violence survivors and their families. According to Christa Lindsay, Community Engagement Manager for ACESDV, member organizations provide direct services ranging from emergency shelter, housing, advocacy, to counseling and other supports to survivors.

“Jacksons Food Stores’ Gift of Peace campaign does more than raise funds – it shows survivors that their community supports them and sees the problem of sexual and domestic violence as one we all must work on together to solve,” Lindsay said. “We’re grateful to Jacksons for taking a stance on these issues and supporting us through this campaign. It shows the community that our collective impact can and does change lives.”

Customers can make a tax-deductible donation for a peace dove to support the campaign at any Arizona Jacksons Food Store or ExtraMile convenience store starting November 27 through December 25th.

About Jacksons Food Stores
Since John D. Jackson founded Jacksons in 1975 as a single service station, the Idaho–headquartered company has grown to be a nationally recognized chain of more than 250 company–operated convenience stores in Idaho, Nevada, Oregon, Washington, Arizona and Utah under the Jacksons Food Stores and ExtraMile Convenience Store brands. In addition, Jackson Energy now wholesales branded fuel to more than 900 locations throughout 9 western states.