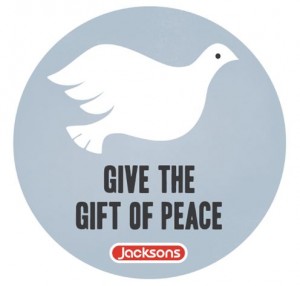 (Phoenix, AZ) – On the day prior to Thanksgiving Day, Jacksons Food Stores and the Arizona Coalition to End Sexual & Domestic Violence will launch the “Give the Gift of Peace” campaign, a holiday season campaign that runs through December 25th to raise funds for the prevention of domestic violence. This is the 13th year anniversary of the campaign throughout the West. This campaign is important for community awareness and legislative efforts to ensure funding priorities for sexual and domestic violence victims. Contributions can be made in increments of $1, $5, or $10. At the end of the campaign, Jacksons Chief Executive Officer, John Jackson, will match Jacksons Food Stores customer contributions dollar for dollar up to $75,000 with all the proceeds going to the Arizona Coalition to End Sexual & Domestic Violence.

Last year was the second year of the campaign in Arizona. Arizona Jacksons Food Stores customers contributed nearly $6,000, resulting in almost $12,000 in donations, including Jacksons’ dollar for dollar match contribution.

Jacksons Food Stores in Washington, Oregon, Idaho, Nevada, and Utah will also participate in the campaign, and proceeds will go toward coalitions against domestic violence in the respective states. Since the inception of the “Give the Gift of Peace” campaign, over $1,200,000 has been raised through this program to help end violence against women and girls and assist individuals who have experienced domestic violence.