You are here: Home / About Sexual Violence / Prevention

Prevention is critical in ending violence in our communities. For more resources and areas to implement prevention programs on your community, workplace, school etc:

What is a Bystander?
The term bystander conjures up many, and sometimes conflicting, images. For some the word connotes a passiveness, an innocent bystander who could not, or did not, do anything in a dangerous situation. For others the term includes more engagement such as someone who witnesses a car crash and calls for help or someone who “stands by” a friend when he or she is being harassed. While the term “bystander” is embedded in the research, we challenge each of us to create more engaging words and images. The reality is that everyone is a bystander, every day, in one way or another to a wide range of events that contribute to sexual violence.

Everyday, we witness situations in which someone makes an inappropriate sexual comment or perpetrates sexual harassment. Sometimes, we say something or do something, but at other times, we choose simply to ignore the situation. How do we make those decisions? Is there a safe way to increase the number of times and situations in which we might choose to act, and could that way also make sense for others?

Anyone who lives in today’s society likely feels the impact of the sexual violence surrounding us. The visibility of sexual violence has become more apparent in the mainstream media, the news, on talk shows, and in the memoirs of famous people. In fact, most of society bears witness – is a bystander – to sexual violence. (NSVRC)

Bystander Intervention?
When we consider stopping sexual violence, we usually think of intervening in individual acts of child sexual abuse or rape. But rarely is the individual act the only opportunity to intervene. Rather, there are literally hundreds of little comments, harassments, and other forms of abuse that lead up to what we think of as the sexually violent act. If we limit our interventions to a culminating “event,” we miss multiple opportunities to do something or say something before someone is harmed.

Instead, think of the “event” as being on a continuum of behaviors that demand specific interventions at each step. At one end of the continuum are healthy, age-appropriate, respectful, and safe behaviors. At the other end are sexual abuse, rape, and violent behaviors. Between the ends are other behaviors, ranging from those that begin to feel inappropriate, coercive, and harassing.

Each situation is an opportunity to intervene by reinforcing positive behaviors BEFORE a behavior moves further towards sexual violence.

Continuum of Behaviors?
When looking at all of the behaviors along this continuum there are a number of ways to either say something or do something in each category. There are many ways to take action and many opportunities to take action with no one right answer. 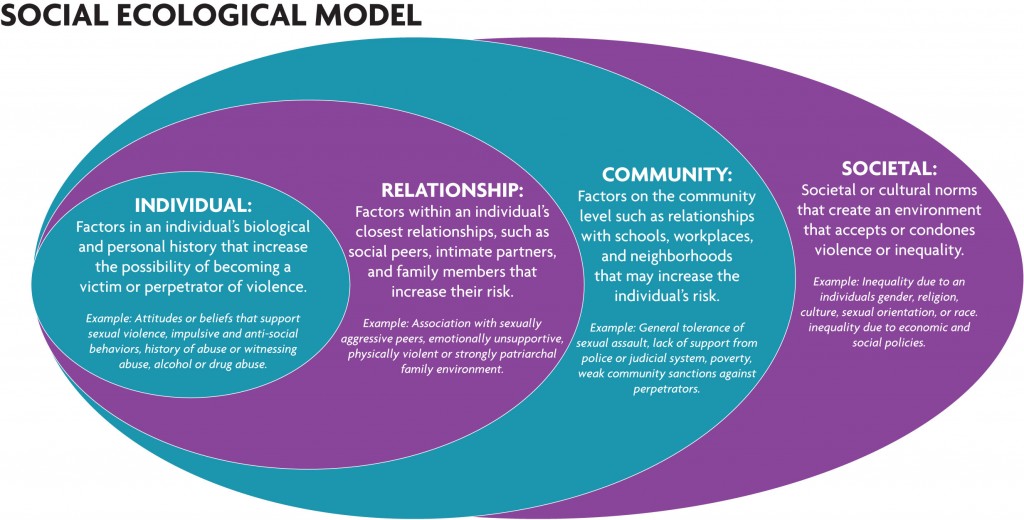 Individual Level
Provide knowledge, skills, and training on how to help. It is important that individuals learn to recognize a pattern of warning behaviors that demand a conversation or an action. Becoming an active bystander means making focused observations, asking compassionate questions, and having knowledge of what to do at various points on the continuum of inappropriate and violent behaviors. All too often, responses to sexual violence are based on shame and denial. For example, when a family member has perpetrated sexual abuse, denial may feel easier for other family members than opening the door to aninvestigation that would bring shame upon the entire family.

In our society, there is little motivation for individuals to speak up and tremendous pressure to keep silent when they see or sense something is wrong. Often, people do not respond because they are concerned about their own safety, or they do not know what to do; they may also feel that the level of behaviors they witness do not warrant intervention. Individuals will more likely intervene when they have specific skills to recognize behaviors that are unhealthy or problematic and know how to intervene before abuse is perpetrated.

This means that programs should teach the skills needed to reward healthy behaviors and to say or do something when unhealthy or problematic behaviors are observed. An important and common feature of many programs is giving people an opportunity to practice what to do and say in various situations. Programs also need to outline what can be said or what to do with the friend or family member who demonstrates any of the behaviors along the continuum. This may include information about what to say around healthy relationships, especially between teens or between children.

Again, it is critical that people learn how to assess the danger in a situation, and also, when not to intervene for safety reasons. In some situations, intervention may mean seeking out other people, including professionals, and sometimes the anonymity of those involved must be assured.

Relationship Level
Tell stories and be a role model that promotesengagement.We rarely hear or tell stories of assault in which we mention someone who tried to intervene. This absence in our stories conveys an unintentional message that no one could have changed the course of events. To counter this message, it is important to tell survivor stories that include a friend or family member who spoke up to change the course of events. Stories of bystander intervention should also be included when we talk about offenders or those at risk for perpetration, sexual harassment, or violence.

Asking some follow-up questions after someone tells his or her story may reveal that other people played a role in how the situation unfolded. Such questions include:

Community Level
Create organizational policies that encourage bystander engagement. Promoting bystander intervention at the community level can be accomplished by changing the dynamics of a particular peer culture (Katz, 2006) or by creating organizational policies that encourage bystander engagement. It is also effective to design and offer programs and resources that support individuals to take action as bystanders.

College programs and policies provide a good example of some of these changes. In recent years, an increasing number of programs address men and women as bystanders in their college or university (Foubert et al., 2006; Banyard, 2004; Katz, 2006). Official university endorsement of these programs sets the stage for a new social norm that encourages “standing up” and “speaking out.” The education programs, especially those that involve student leaders in their outreach, reinforce this stated norm and also provide the needed skills and information. Although various bystander programs exist in a range of venues spanning all ages, it is at the college level that we see most of the bystander programs that have been formally evaluated and assessed.

Society Level
Advocate for and establish bystander programs, research, evaluation and policies. At the societal level, positive messages in the culture and in media coverage along with policy and legislative changes may significantly impact incentives for action; such changes also illuminate the cost of doing nothing. For some, they offer a sense of hope that more action and bystander intervention will keep everyone safer.

The Violence Against Women Act (VAWA) has changed the landscape of anti-violence work, validating and funding key victim and survivor services across the country. VAWA also provides Rape Prevention Education (RPE) funds, which is the only funding for prevention programs available to most states. Many other laws (e.g., residency restrictions for sex offenders) have focused on increasing punishment for all sexual offenses. These may have unintentionally created disincentives for many individuals, families and communities to take appropriate action in less severe cases.

These legislative changes did not happen in a vaccuum, but were, in part, propelled by powerful stories told by victims and survivors over the past twenty years. In fact, as society began to recognize the prevalence and impact of sexual violence it also increased its commitment to stopping it. We can mark this growing recognition through statements from key organizations such as the American Medical Association, who declared sexual violence as an epidemic (AMA, 1995), and through the increased media reporting on sexual violence.

Additionally, the number of television programs which have story lines discussing sexual assaults as a form of violence has skyrocketed. This more sustained focus in the media helped create an environment for policy and legal changes that may ultimately improve the status and frequency of engaged bystanders.

Changing Social Norms
Researchers have described the decision to-do-nothing as bystander apathy. But few people are truly apathetic when it comes to sexual violence. When someone chooses to do nothing, it is often rooted in a social norm. Programs that promote bystander involvement recognize the importance of shifting existing social norms so that there is social pressure to do or say something instead of nothing (Berkowitz, 2003).
See what new social norms could look like